While bureaucrats in Brussels try to shift the burden of responsibility for Syrian refugees to Serbia, the Eurocrats have apparently forgotten that the Balkan country has had to deal with its own Serbian refugee problem caused by the bloody dissolution of Yugoslavia instigated by the West, Dragana Trifkovic told Sputnik.

The current migration of people from the Middle East to Europe is an event of historic proportions, which could result in the long-term destabilization of European countries and drastically change the established status quo on the European continent, according to Dragana Trifkovic, an author, expert in geopolitics and the Director General of the Center for Geostrategic Studies, in Belgrade, Serbia.

"The huge wave of migrants from the Middle East is a big problem for Europe because it substantially changes its structure. We are now practically at the beginning of a crisis that will probably escalate in the future. Concerning Serbia, we are a transiting country for the migrants, not their final goal, and we don't have a strategy for their permanent stay.  That would be unacceptable for Serbia because the country cannot even provide a normal life for its own citizens, which is why young people leave Serbia looking for better conditions abroad," Trifkovic told Sputnik.

Eurocrats Shifting Burden of Responsibility to Others 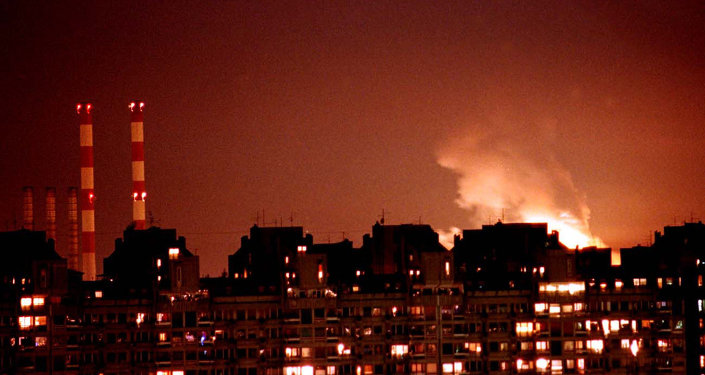 © AP PHOTO / DIMITRI MESSINIS
The Yugoslav Wars: Story of Serbian Genocide Still Remains Untold
The expert elaborated that the danger for Serbia comes from Brussels, which pressures Belgrade to take care of a certain number of migrants. Yet on the other hand, the West cannot force the asylum seekers to stay in Serbia because the Balkan country is not considered as attractive as Germany. The asylum seekers do not view Serbia as a country, "that can offer them anything," Trifkovic underscored.

Curiously enough, there is a new peculiar trend that can be now observed in the Balkans: Albanians from Kosovo and Metohija are joining the migrants from the Middle East on their way to Western Europe, according to the Director General of the Center for Geostrategic Studies.

"Until now, the Serbian government has been taking the line of least resistance and was making concessions to Washington and Brussels at the expense of Serbia's national interests. That is why some collaborators of the West already stated in the Serbian media that Serbia should take care of a certain number of migrants as a candidate for EU membership," the expert remarked.

However, it seems that the Brussels' bureaucracy has apparently forgotten that Serbia itself bears the burden of social problems caused by the Yugoslav Wars of 1991-2001 and NATO aggression against the Balkan state.

1 / 4
© AFP 2018 / ANDREJ ISAKOVIC
A man walks past the building of former federal military headquarters in Belgrade on March 24, 2010, destroyed during the 1999 NATO air campaign against Yugoslavia.

"I have to mention the fact that Serbia hasn't even found a solution for the Serbian refugees, I mean, for the Serbs that fled the regions where they were living because of the terror, regions that were annexed to the new born states after the breakdown of Yugoslavia. Many Serbs that fled from Croatia, Bosnia and Herzegovina, Kosovo and Metohija, still live in collective refugee centers and they don't have any other choice. Conditions in those centers are very bad," Trifkovic told Sputnik.

The expert pointed out that Serbia has in no way participated in the destruction of the Middle Eastern countries and so far has absolutely no obligation to cope with the consequences of decades-long US/NATO interventionist policy in the region.

Will Refugee Crisis Undermine Fragile Religious and Ethnic Balance in the Balkans? 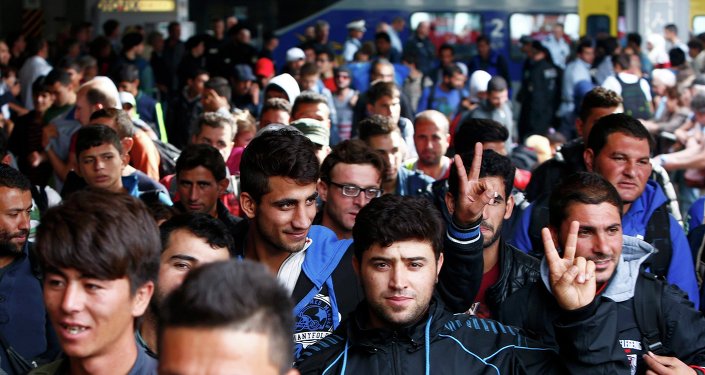 © REUTERS / MICHAELA REHLE
Europe Almost Done: Decline of West Looks Real in Light of Refugee Crisis
One question has come up regarding whether or not the influx of Muslim refugees, which allegedly includes former Islamist fighters, will upset the fragile religious and ethnic balance in the Balkans and further aggravate tensions in the region?

"We have seen that migrants are families with young children, and they should not be viewed through the war prism. Someone is responsible for the fate of these people and for destroying their future," Trifkovic emphasized, adding that the main problem in the Balkans is not Muslim refugees, but Muslim extremist and terrorist structures that are supported primarily by the United States, and then Turkey and Saudi Arabia.

"I mean that we have a problem with the Albanian terrorists, especially in Kosovo and Metohija and in connection with this problem, there is a project of a Greater Albania supported by Washington. Additionally we have a problem with the Wahhabi and Islamist extremists in Bosnia and Herzegovina, as well as in parts of Serbia where there is a majority Muslim population. In this respect, the mechanism for the destabilization of the Balkans has long been established over these terrorist structures," the expert told Sputnik.

Still, although the influx of refugees from the Middle East is a much more serious problem for Western Europe, unfortunately it could jeopardize the security of the Balkans as well, according to the expert.

© AP PHOTO / MUHAMMED MUHEISEN
A Syrian refugee man holding his sleeping son, rests on the ground after spending the night at a collection point in the truck parking lot of the former border station on the Austrian side of the Hungarian-Austrian border near Nickelsdorf, Austria, Wednesday, Sept. 23, 2015.

"The solution has to be found and accepted by Europe as a whole, but not by constructing fences, which is totally contrary to the self-declared ideology of the freedom of movement and the protection of human rights," she stressed.

In light of this the current crisis may deal a lethal blow to the European Union, resulting in its ultimate collapse.

EU's Blind Support for US Interventionist Policies Backfires at Europe

"The blind support of US interventionist policies that has resulted in the destruction of the Middle East countries, as well as in the long-term destabilization of the region, will have major consequences for the EU and Europe in general. Additionally, European countries financed, supported and armed the rebels, adventurers and terrorists, in order to overthrow the regimes considered inappropriate by Washington," the expert stressed.

© AFP 2018 / NIKOLAY DOYCHINOV
US Using 'Controlled Chaos' Strategy for Social Engineering in Europe
Trifkovic called attention to the fact that the European elites, however, still don't think about their own responsibilities and that they are unwilling to solve those problems. Instead, the EU member states are arguing with each other over how many refugees each country should take in.

The expert believes that a strategic approach to the refugee crisis in Europe should include shifting from the previous irresponsible policy conducted by Brussels towards its own citizens, and ending the EU's blind support of Washington's interests.

The second step in mending the crisis should be halting the West's foreign policy aimed at destabilizing the Middle East, and developing a plan in order to eliminate the consequences of this policy.

"That kind of plan would have to involve help for state-building forces, not for the forces of chaos. For example, help for Bashar al-Assad to stop ISIL's expansion, to settle the conflict, to stabilize and take care of people who were injured during the war," Trifkovic suggested.

Henry Kissinger: 'To Be America's Friend is Fatal'

Commenting on the possible consequences of the refugee crisis to Europe, Dragana Trifkovic cited famous US politician Henry Kissinger, who once quipped that "it may be dangerous to be America's enemy, but to be America's friend is fatal."

"There is a very important book titled "Europe has died in Pristina", written by Jacques Hogard, a former French officer who had seen with his own eyes the suicide of Europe and described it in his book. The decadence of European civilization is entering its final phase. The only hope that remains is that new political elites will grow stronger, elites that are aware of the situation in which we find ourselves and that they will be able to assume a historic responsibility and work on correcting the errors of unaccountable bureaucrats in Brussels," Trifkovic pointed out.

And still there is a light at the end of the tunnel, she believes:

"I would like to add that I am optimistic, that the migrant crisis is a problem that could reanimate Europe and force it to take its fate into its own hands," Dragana Trifkovic concluded.