Russia’s media are currently in a lather about their nation’s old friend Serbia becoming too chummy with the old adversary NATO. The mystery is: why?

For all sorts of reasons, both domestic and diplomatic, Serbia is showing absolutely no hint of wanting to join NATO. It does want to join the European Union. Oddly, in a purely UK context, and as a Liberal, I am actively campaigning to have Britain leave the European Union; however, I understand Serbia’s instinct for the economic security of a customs union. On the other hand, I’m a long-standing political supporter of NATO’s mission in Europe. And here again, I understand the Serbian government’s very different view.

For all sorts of reasons, both domestic and diplomatic, Serbia is showing absolutely no hint of wanting to join NATO. 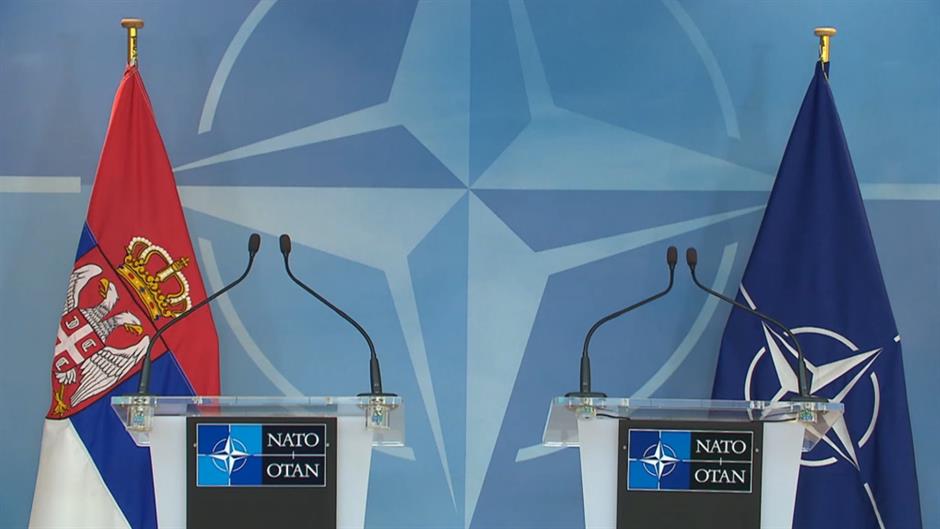 Serbian Prime Minister Aleksandar Vučić has said repeatedly that Serbia has no plans to join NATO. For its part, NATO has acknowledged this, stating only recently that it “fully respects Serbia’s policy of military neutrality.” There is widespread support for joining the EU but almost no political support at all for NATO accession. Therefore, almost by definition, it will not happen. End of story, you might think.

In February, the Serbian parliament ratified a new agreement on Logistic Support Co-operation. This appears at first glance to give NATO personnel operating in Serbia diplomatic-style immunity from local legal liability and wide-ranging exemptions from duties and taxes. The agreement is with the NATO Support and Procurement Organization (NSPO), and it states:

This Agreement establishes the legal framework and foresees the basic principles for the support co-operation between the Government of the Republic of Serbia and NSPO in the specified areas including, but not restricted to, supply, maintenance, procurement of goods and services, transportation, configuration control, technical assistance and execution of Trust Fund Projects for which NSPA is the Executing Agent.

Some of the Vučić government’s political opponents have gone on the attack, loudly expressing the view that their nation is now under de facto NATO occupation.

In fact the agreement is a tidying up of a series of agreements first signed in 2006—by a Serbian government then led by the Democratic Party of Serbia (DSS), which has been staunchly critical of the recent update. The original deal gave NATO troops free passage through Serbia for deployment in Kosovo where one of their tasks was to protect the area’s Serb population. “We need NATO as an ally to keep our people in Kosovo safe,” Vu?i? has said. The updated deal, far from supplying NATO with new rights, actually applies reciprocity for the first time, giving Serbia’s own military the same rights as those already enjoyed by NATO.

Nonetheless, there have been anti-NATO street demonstrations, cheered on—quite surprisingly—by the same DSS which signed the earlier agreement in the first place.

Unsurprisingly, the Russian state media picked up on the controversy quickly. Moscow’s Sputnik news agency, successor to the old propaganda outlet RIA Novosti, quoted a Serbian “expert” named Dragana Trifkovic. “I have to mention that this form of cooperation is far worse for Serbia than its NATO membership because Serbia is now de facto at NATO’s disposal,” Trifkovic says. “On the other hand NATO has absolutely no obligations towards Serbia, unlike the commitments that exist towards the member States.”

This is not the first time Trifkovic has surfaced in Sputnik’s reporting. In November, she was quoted extensively about Russia’s annexation of Crimea.

"Since the breakup of the Soviet Union, the United States has been redrawing the borders in Europe according to their needs, starting from the Balkans. Serbia was bombed just because it did not voluntarily consent to the American occupation," Trifkovic was quoted as stating.

So we know where she stands.

Serbia joined NATO’s Partnership for Peace program in 2006 (under the DSS government). Like Azerbaijan, Armenia, Kazakhstan, Moldova, Georgia, and the other Balkan nations, Serbia has more recently agreed to an Individual Partnership Action Plan with NATO. Some of these states, including Georgia, really do want to join NATO. But no one is forcing them. And no one is concerned that (for instance) Armenia, Azerbaijan, and Kazakhstan resolutely do not want to move in that direction.

And no one is nudging Belgrade towards accession either. “America will never impose a security arrangement on another country,” President Barack Obama declared in 2009—in his famous “reset” speech in Moscow. That principle appears to be holding.

Serbia has declared herself militarily neutral. This makes sense for Serbia. Its cultural and historical ties to Russia are long and deep. Just before his death in 2010, the great Serbian thinker and political theorist Svetozar Stojanović wrote, “If it became a NATO member, it could not retain its close ties with the important group of nonaligned countries, nor could it preserve its reputation as a country that participates in UN peace missions on a principled basis.”

He added: “Pluralization—instead of singularization—of foreign and security policy is what gives ‘intelligent power’ to a small state such as Serbia.” He was right. Nations like Serbia shouldn’t need to choose sides.