Will Serbia be able to come out of EU patronage?

“Serbia will turn into the most powerful military force in the region,” this is how Vestinet (Serbia) has announced the long-awaited arrival of Russian MiGs. According to the source, the planes are to arrive at the Batajnica military airport on Vidovdan (June 28 - St. Vitus Day and also the day of the Battle of Kosovo. That day in 1389 marked a turnabout in Serbia’s history and the start of the Ottoman occupation). And even though Serbian Defense Minister Zoran Djordjevic has not confirmed the date, he has said that the planes will arrive in time, while according to Serbian analyst Miroslav Lazanski, the planes will be in Serbia by mid-July. 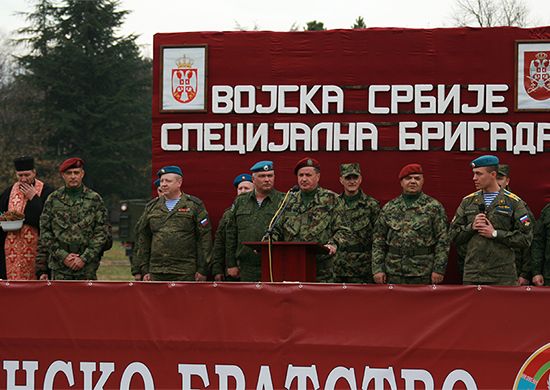 If this report is true, this summer will be hot for the Serbian-Russian military cooperation. During the Slavic Brotherhood Russian-Belarusian-Serbian military drills in Belarus, the sides are drilling counter-terrorist actions. Are the Serbs trying to break free from the EU’s hands or are they preparing for some other new maneuvers in the Balkans? As far the Europeans are concerned, they do not approve of Serbia’s intensive contacts with Russia. In Nov 2016, after one of the stages of the Slavic Brotherhood maneuvers, Süddeutsche Zeitung said that the Serbs do not want to lose their influence in Kosovo. Nor do they want to act against Russia in their foreign policy.

According to Director of the Belgrade-based Center for Geostrategic Research Dragana Trifkovic, joint maneuvers with the Russians and the Belarusians are crucial for the Serbs as the Russians are in the vanguard for the combat against terrorism and have lot of experience to share. “In contrast, NATO is unable to fight the new forms of terrorism and cannot protect even its own members,” Trifkovic told EADaily.

To him, it is natural that Serbia is obtaining Russian arms. “Serbia needs new arms mostly because the reforms imposed by the West have left it almost unarmed,” Trifkovic said.

On the other hand, Russian journalist Konstantin Kachalin wonders what future Russian arms will have in Serbia. “It is clear that the Serbs and their neighbors have no alternative to being either associated members or joining NATO. We must be realists and must try to see the things the way the Serbs see them. For the time being, the Serbs are playing a double game and are contacting both Moscow and Washington. [Former Serbian President] Boris Tadic told me once that this is the only way for them,” Kachalin said.

For Trifkovic, Russia is the only chance for Serbia to break away from the EU or at least come closer to military neutrality. “We have not yet broken free from the EU, but today Europe is busy solving its own problems and we can use this chance for a maneuver. Officially, we are neutral but we have lots of agreements with NATO that run contrary to our official status. In order to achieve some balance, we should slow down our contacts with the EU and to intensify our contacts with Russia,” Trifkovic said.

Most of the Serbs would be happy to see their country strong in the Balkans. New Serbian President Alexandar Vucic is well aware of this. This why he promised his people before coming into office that he would not go against their people as far as the country’s constitution is concerned. This is a strategic issue for the Serbs as without certain changes in Serbia’s Constitution, Kosovo cannot be de jure independent. Kachalin is not surprised to see Vucic carrying on the double game policy successfully implemented by his predecessors over the last 20 years. “Even though the Serbs love Russia, they live in Europe. Yugoslavia, Serbia, Croatia – all of them have the Danube and the Danube means connection to the Black Sea. So, Serbia has no alternative to being part of Europe. But contacts with Russia are also crucial. I think we must remain brothers in faith and blood,” Kachalin said.

Yelena Gyskova, Head of the Center for the Study of Modern Balkan Crisis, the Institute of Slavic Studies, the Russian Academy of Sciences, doubts that Serbia will manage to play this game for long. “Now it is time for the Serbs to choose between the stools. Some Serbian intellectuals recommend the third option - the Serbian stool, but when you ask them what they mean, they say that they mean reliance on both the EU and Russia,” Guskova said.