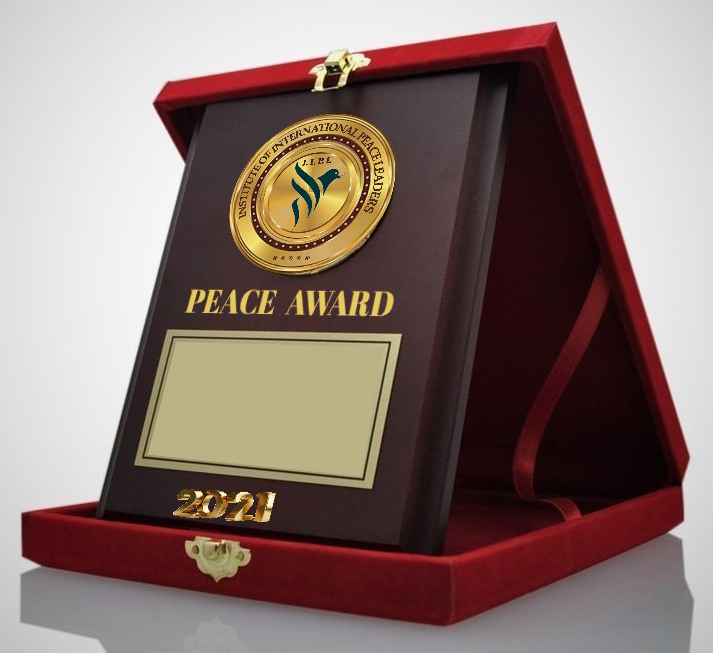 Institute of International Peace Leaders Introduction: IIPL Peace and Cultural Award Who we are? Institute of International Peace Leaders – IIPL established in October, 2019 is a non-profit, non-partisan, non-political, and non-religious think tank to promote peace, awareness of sustainable development goals and human rights, climate change, and inter religious harmony. About the Award: Through its affiliated programs, the IIPL Prize fosters excellence by recognizing and encouraging promising Professionals and researchers and Scholars as well as Peace activists. We recognize the cultural work of Artists and historians, art historians, archaeologists, digital humanists, curators, documentary filmmakers, women leaders, Religious scholars, Peace activists and all those who deepen our knowledge and understanding of the modern today. IIPL Peace and Cultural Award is an international award presented annually to honor individuals and organizations in various fields that have made outstanding contribution toward the realization of a peaceful and harmonious world. They are selected not only in recognition of their past achievements, but for their ongoing contribution to building a better future.

Announcement and Presentation: Announcement of the nominees is made on the Peace Award Web Portal of Institute website on the date mentioned in the advertisement. IIPL awards are usually presented at a ceremony during the annual International Peace Leaders Conference, where the laureate takes center stage to deliver a commemorative address and receive award shields, certificates and other benefits. CATEGORIES OF IIPL PEACE AND CULTURAL AWARD Peace and Security Award: Peace aims to recognize the powerful stories of peace-builders and activists in the region who embody the IIPL agenda. To be eligible for an IIPL Peace Award, nominees: • Must not have previously won a P&S Award. • Must have demonstrated capacity in mobilizing people and resources for peace building. • Must have worked on furthering the cause of peace, gender equality, equal participation, and empowerment of women, in either/or the following areas: Participation: be in a position of representation at any levels of decision making, including peace-processes, electoral processes and other decision- making bodies at the national and sub-national levels; Conflict Resolution: contributing to preventing the emergence, spread, and re-emergence of violent conflict, and/or addressing root causes of conflict; Protection: contributing to the protection of women and girls in conflict and post-conflict settings, including reporting and prosecution of sexual and gender-based violence; • Relief or Recovery: contributing to relief and recovery including working on health services, income generations and trauma counselling. Contributions to survivors of sexual and gender-based violence are also included. Climate change Awards The Winning projects demonstrate leadership on climate change by nations, businesses, investors, cities, regions and civil society as a whole. The annual award programme, run by IIPL Climate Change since 2021, recognizes the world’s most innovative, scalable and replicable examples of action to tackle climate change. The projects are recognized as solutions that not only address climate change, but also help drive forward progress on many other sustainable development goals, for example, innovation, gender equality and economic opportunity. A special new award category called ‘World Climate Leaders’ will be awarded for 2021. It recognizes transformational and replicable government action at any level (national, regional, city, community, etc.)

Inter Religious harmony Awards H.M. King Abdullah II of Jordan first proposed the World Interfaith Harmony Week at the UN General Assembly on September 23, 2010. Just under a month later, on October 20, 2010, it was unanimously adopted by the UN and henceforth the first week of February will be observed as a World Interfaith Harmony Week. The World Interfaith Harmony Week is based on the pioneering work of The Common World initiative. This initiative, which started in 2007, called for Muslim and Christian leaders to engage in a dialogue based on two common fundamental religious Commandments; Love of God, and Love of the Neighbor, without nevertheless compromising any of their own religious tenets. The two commandments are at the heart of the three Monotheistic religions and therefore provide the most solid theological ground possible. The World Interfaith Harmony Week extends the Two Commandments by adding ‘Love of the Good, and Love of the Neighbor’. This formula includes all people of goodwill. It includes those of other faiths, and those with no faith. The World Interfaith Harmony Week provides a platform—one week in a year— when all interfaith groups and other groups of goodwill can show the world what a powerful movement they are. The thousands of events organized by these groups often go unnoticed not only by the general public, but also by other groups themselves. This week will allow for these groups to become aware of each other and strengthen the movement by building ties and avoiding duplicating each others’ efforts. “The award is bestowed anyone who contributes in recognition of their ongoing great contribution in promoting interfaith harmony and peaceful co-existence among followers of different religions in the world and for setting a good example as religious leaders from different faith traditions working together in addressing counter violent extremism and enhancing inter-religious constructive dialogue and cooperation for the common good of all based on the teaching of the Golden Rule which says Treat others the way you want to be treated” Women Empowerment Award - Women for Peace and Security IIPL has a Commitment to the promotion and implementation of the Women, Peace and Security agenda. The purpose of this prize is to honor a woman leadership who has demonstrated, in the context of international relations political, diplomatic, military, associative and/or academic functions, a particular and recognized commitment to: Peace and security issues worldwide. Women working in the field of • Equal participation of women and men in the field of peace and security. • The prevention of conflict-related sexual and gender-based violence and the protection of women in conflict situations.

• And/or the mainstreaming of women's needs and perspectives into relief and recovery initiatives in post-conflict countries are given priority for this award. • Each delegation of member IIPL countries can nominate a candidate, through its Head of Delegation and nominees must be nationals of a IIPL member or partner country and of legal age. IIPL delegations from member countries may, if they wish, nominate a woman of a nationality other than that of the country they represent. The winner of the award is selected by a jury composed of members of the Central bureau of IIPL in Pakistan and Special Representative of the IIPL Secretary General for Women, Peace and Security, and will be announced at the International Women's Day (March

which is a global day celebrating the social, economic, cultural, and political achievements of women. NOMINATE We invite you to nominate outstanding scholars and practitioners engaged in exploring any aspect of the human past. Institute of International Peace Leaders Awards committee https://www.internationalpeaceleaders.com/ This email address is being protected from spambots. You need JavaScript enabled to view it.