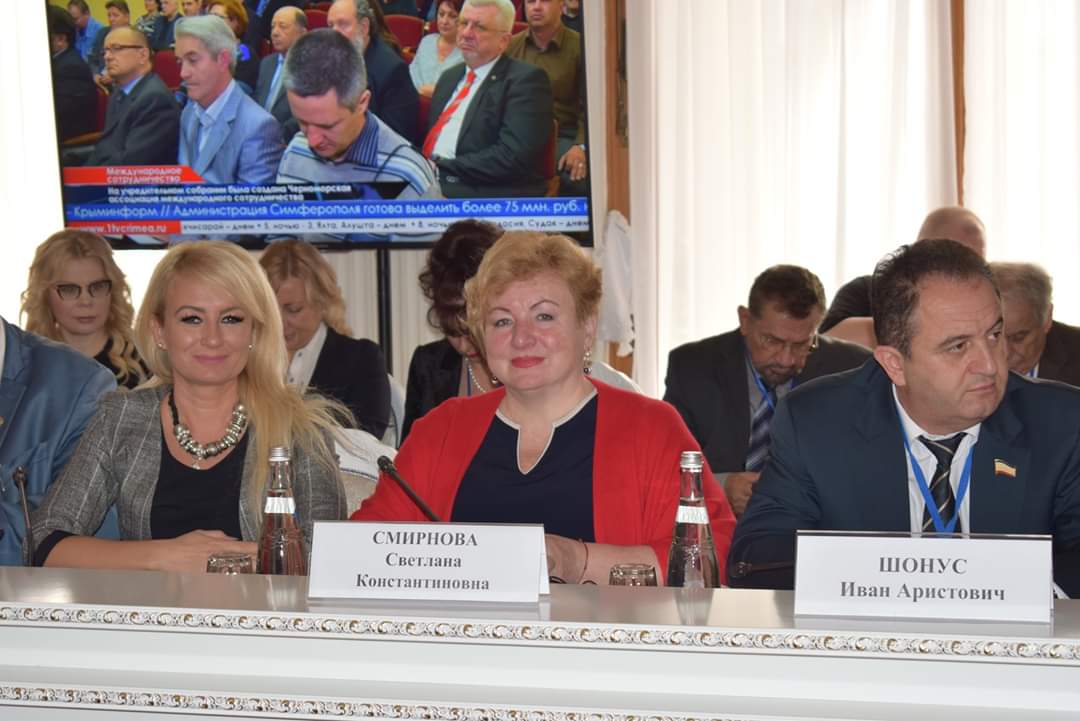 I would like to take this opportunity to praise the traditional Russian diplomacy, which nowadays shows exceptional skills. Russia has a leading role in contemporary international relations and the global system, as a power committed to building constructive relations on the basis of mutual respect.

Following its successful role in the Middle East and its increasing influence in Africa, Russian diplomacy has become an indispensable factor in resolving conflicts peacefully, worldwide.

Crimea, as a place of historical importance, is ideal for holding international conferences that discuss topics that are important to the future of the whole world.

On the other hand, it is important that international experts come to Crimea in order to properly understand the democratic process of reunification of Crimea with its country of origin.

Crimea is part of Russia today and no one should question that.

It is interesting that certain powers contest the return of Crimea to Russia, and at the same time, they advocate the separation of the historical part of Serbia, Kosovo and Metohija. This is more than an obvious example of the application of double standards, because how else can it be explained that it is legitimate to support separatism by bombing, and that it is illegitimate for the people of Crimea to decide, in a democratic referendum, to correct an administrative solution from 1954?

I would like to thank the Russian diplomacy for assisting Serbia with the issue of Kosovo and Metohija and on its righteous position that the Kosovo problem can be solved solely in accordance with UNSCR 1244.

For Serbia, the Kosovo issue is the most important State and national issue and its resolution will have an important influence on the future of our people.

One of the reasons I have chosen to engage in public diplomacy is precisely the issue of Kosovo and the opportunity to participate in international conferences around the world to clarify the position of the Serbian people on this issue.

In addition to expanding influence and promoting certain ideas, public diplomacy is extremely important for strengthening international relations and cooperation in various fields.

Serbia and Russia have deep historical, spiritual and cultural ties that need to be encouraged. Although the Serbian and the Russian people changed the names of their States, they experienced difficult times and had different governments, they have never lost their attachment to each other. No one shall have the right to monopolize or misuse the Serbian-Russian relations.

For this reason, it is extremely important that public diplomacy play a role in promoting and developing the Serbian-Russian relations. It is imperative that this cooperation is thoughtfully developed through strategic projects that would concern science, education, students exchange, cultural and economic cooperation.

It is necessary to mention here Crimea, which has occupied an important place in the Russian foreign policy for the last five years. The Yalta Economic Forum gathers more and more people each year and draws the attention of the world public.

Technological advancements have led to changes in global communication. The internet is now taking precedence over other media, and information is easily available today.

In addition to public diplomacy, the internet and social networks are an important segment when it comes to spread influence. Both things influence the creation of the public opinion.

Opinion creation can prevent and stop conflicts in various zones. It is particularly important to prevent the creation of a conflict between Russia and Europe, as well as to stop the development of Russophobia. At the recent commemoration of the beginning of the World War II in Poland, two countries that suffered the most in that conflict, were not invited. Russia and Serbia. The impact on the public opinion can also prevent attempts to reshuffle history.

Serbia has a bitter experience from the 1990s, when there were no alternative sources of information and no possibility to spread its influence. The country has suffered irreparable damage because of the demonization by the media. I hope this will never happen again to other countries.

It is important for Serbia to develop cooperation with Crimea because we are bound by special ties from the imperial period and special personalities such as Nikolai Krasnov. Nikolai Krasnov was the city architect of Yalta and after the October Revolution he emigrated to Belgrade. He became the most prominent Serbian architect, and with his creative work, he left an indelible mark in Belgrade and other cities in Serbia.

On this occasion, I would like to invite the authorities of Crimea on behalf of the Serbian Movement Dveri to visit Belgrade and the Assembly of Serbia, whose interior was designed by Nikolai Krasnov, in order to strengthen our cooperation and agree on further joint projects. We have big tasks ahead and a lot of work.