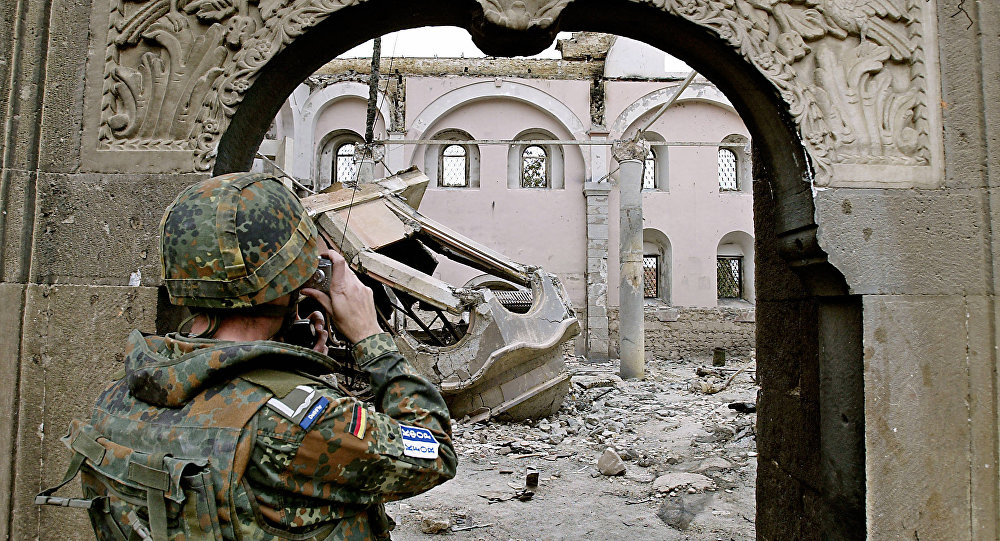 German KFOR (Kosovo Force) has officially ended its 19 years of presence in Prizren, by leaving Prizren Camp On Thursday, October 4, 2018.

At the site of the Prizren camp, according to the plan, some kind of “Kosovar”-German Innovation and Training Park (ITP)¹ will be set up, supported by the so-called Kosovo Government and German Federal Ministry for Economic Cooperation and Development.

However, the given name (Innovation and Training Park) should not trick anyone, since its true purpose will certainly be different. It will probably serve to train the members of the future “Kosovo Army”, the formation of which has been recently announced again by ambassadors of various western countries in Prishtina.

Germans think they have successfully fulfilled their mission in Kosovo, in the region of Prizren, which was their area of responsibility (AOR), that now the time has come to relocate their command to the center of events - to Prishtina and to hand over Prizren camp to the future Kosovo Army, for whom they have cleared the path towards the finalization of Kosovo independence and the defense of its “sovereignty” and “integrity”.

They see Kosovo Albanians as their traditional allies from both World Wars; therefore, it wasn’t difficult at all to find common cause again in the new war, led by the common goal – the creation of an independent Kosovo, cleansed from their common enemy – the Serbs.

This is why, in fact, the recent solemn ceremony held by German KFOR in Prizren looked like a friendly farewell of two allies after “well-done” “dirty” work.

The Prizren farewell ceremony will once again convince many historians and chroniclers that history repeats itself. It will remind them of how German Nazis were welcomed by Albanians as their allies and liberators in 1943 with the same massive enthusiasm in the very same place “Shadrvan” in Prizren.

In June 1999, when the deployment of the International Peacekeeping forces in Kosovo and Metohija started, German KFOR was sent to Prizren. At the time of their arrival, there were 10 000 Serbs living in the town, while these days, now that German KFOR is departing Prizren, there are only 18 Serbs remaining, which is, observed from a German – Albanian perspective, a great success.

History will remember the shameful behaviour of German KFOR during the March 17, 2004 Pogrom directed against Serbs when its soldiers passively, some powerlessly, watched the old Serbian part of Prizren – Potkaljaja, the cathedral Church of St. George, Bogorodica Ljeviska, St. Archangels monastery and many other sites of Serbian history and culture, being set on fire. After the March Pogrom at the traditional Medal parade ceremony, many honorable German soldiers refused to receive medals at the end of their six month mission.

History will also remember that the first shots fired by the German army, after the Second World War, were directed with fatal results by German KFOR at two Serb civilians at the moment they were leaving Prizren, rushing to reach the other Serbs who were fleeing from the town.

Why German KFOR was so warmly welcomed back in 1999 and now in 2018 has been given a fond farewell with applause by the Albanians is more than clear.